We may be almost heading into February but I’ve decided to throw it back to just before Christmas when I finally got to tick a major destination off my travel bucket list — New York City! If you’re tired of all the usual European winter breaks or, like me, the Big Apple has been a dream destination for a while, I encourage you to make 2019 the year you finally take the plunge and book a trip there.

There’s something particularly magical about visiting NYC in December; when Central Park is an icy wonderland, there’s festive cheer in the air and the city’s skyscrapers and brownstones look particularly eye-catching against a backdrop of cool, blue sky.

While it may be frosty — and currently eleven months away from when I’m writing this— I’ve put together a few tips on how to make the most of this iconic city in one of my favourite months of the year.

Definitely see the city from above

Seeing the bright lights and iconic buildings of New York from above is truly a must. I always love seeing cities from a more vertical point of view, whether that’s picking out London’s historic monuments from the Sky Garden or watching boats sail past the Bund from the top of the Shanghai World Trade Centre.

There’s a few choices for panoramic rooftop views in New York, including the classic Empire State experience and the Top of the Rock viewing deck. I decided to go for the newest option which is the Observatory at the top of the One World Trade Center. The sleek, modern building sits just metres from Ground Zero, and an ultra-fast elevator speeds you up 100 floors for perfect views of Manhattan and Upper Bay.

While the experience is a little Disney-esque and some very chirpy employees will try to persuade you to hire an interactive iPad that tells you what all the buildings on the skyline are, the views were spectacular! It was also lovely and warm being all indoors, plus it was conveniently positioned next to the Oracle Westfield shopping centre (great for picking up some last minute Christmas gifts).

It’s definitely worth booking tickets in advance for the One World Observatory though so you can skip part of the queue when you arrive. They cost about £27 and you can buy them from various tour sites or the Observatory’s official website. 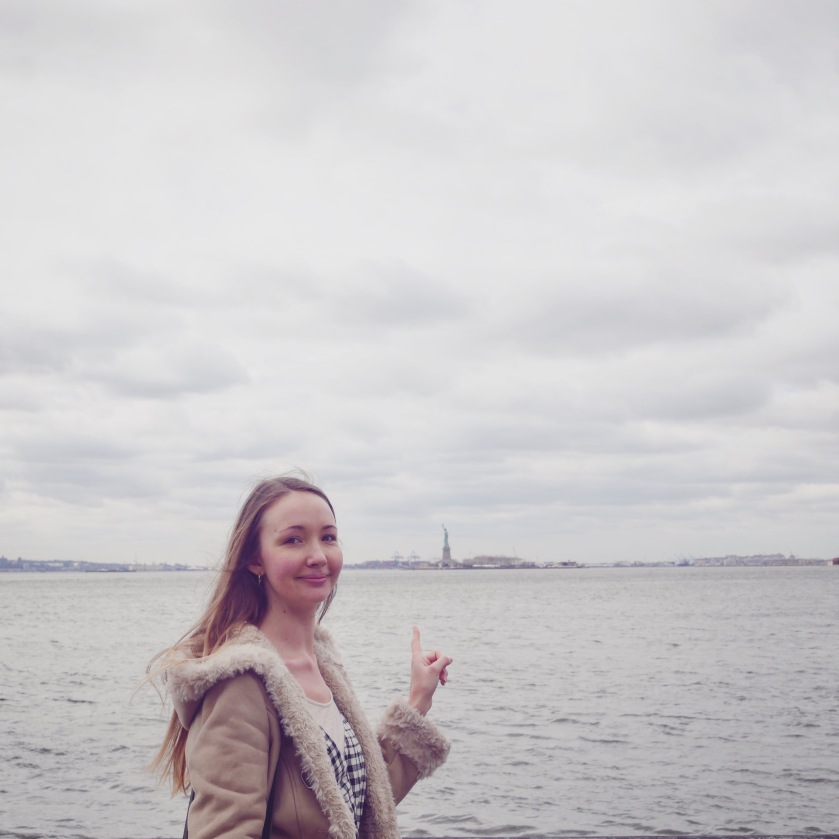 Catching a glimpse of Lady Liberty is on most people’s New York to-do lists. If you’re visiting on a budget and don’t fancy paying for a tour, though, there’s two easy solutions. Many people choose to take the free Staten Island ferry from the Whitehall Terminal in Lower Manhattan which glides right past Liberty Island. Once you disembark, you’ll either need to run round quickly to catch the return ferry or have a look around Staten Island while you wait for the next one.

All in all, the ferry option takes over an hour which isn’t always ideal if you’re only in the city for a flying visit. If that’s the case, simply take a stroll down to Battery Park and you’ll be able to spot the heroic sight of the Statue of Liberty just across the harbour.

Plan to watch a show on Broadway

Whether you’re a theatre fan or not, you’ll swiftly discover that performances on Broadway are on a whole other level and also make the perfect pre-Christmas treat. There are dozens of shows opening their curtains at any one time, from Disney favourites like The Lion King to long-running comedies like The Book of Mormon.

I went to see Anastasia at the smaller Broadhurst Theatre and it was incredible. It was one of my favourite films as a child, however, the Broadway version had an altered storyline that made it — slightly — more historically accurate. I think its run is sadly due to finish soon but there are many other shows to see. Hamilton is definitely top of my list!

Take a turn around Central Park — but not all of it!

I didn’t realise until I was actually in New York just how large Central Park is! It would take you a good few hours to walk around the whole thing which is fine if you’re in the city for a week but not so great if it’s just a weekend.

The day we went to Central Park was also the coldest day we were there so strolling leisurely around it wasn’t the most comfortable outing in the world. It’s still definitely worth a visit, if only to walk — or take a horse drawn carriage —  the short distance to Bethesda Terrace, which any Gossip Girl fan will undoubtedly recognise from the show!

If you can hack it, the Metropolitan Museum of Art (also a Gossip Girl hotspot) is on the east side of the park, about half way up if you’re walking from the south to the north. To break up your walk and warm up, you can stop off in the café at the Loeb Boathouse (it’s behind the main restaurant) for hot chocolate. There’s also a fair few festive attractions in the park, which leads me to… 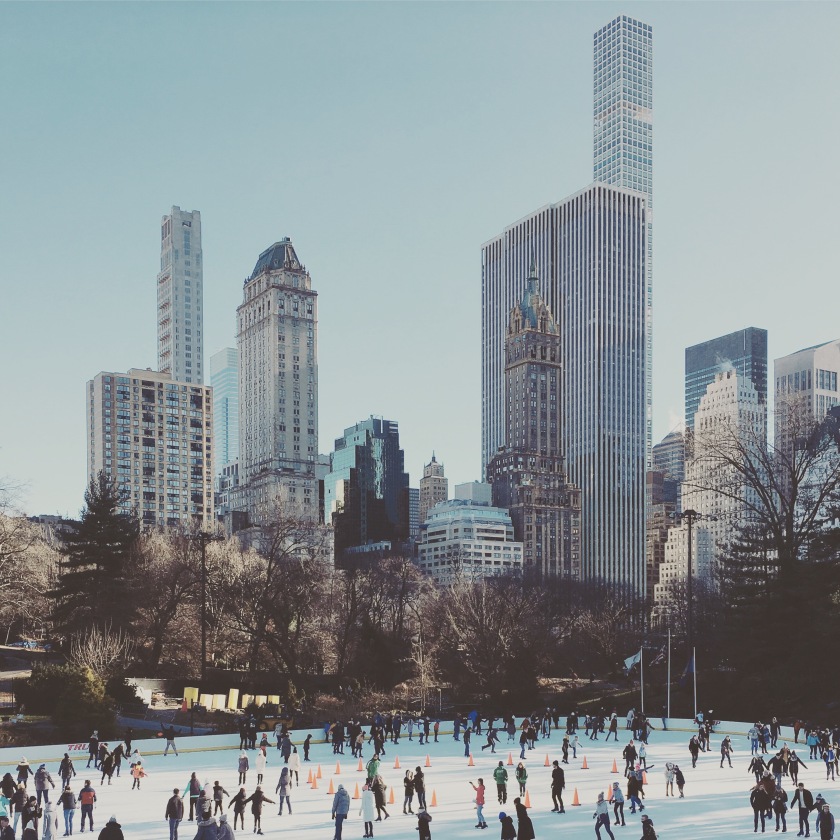 Yes, New York does have Christmas markets — but only a few. While European cities are peppered with festive markets come November (some notably better than others), the Big Apple prefers to ring in the Christmas season with bold light displays, ice rinks and pre-Christmas sales. If, like me, you enjoy wandering around craft markets and sipping on mulled wine, you’ll be relieved to hear that it’s still possible to get that experience in New York.

Bryant Park sits just off Fifth Avenue and it’s where you’ll find one of the city’s Christmas markets complete with souvenir stalls, an ice-rink and a large Christmas tree. As it’s illegal to sell or drink alcohol on the streets in the US, there was a designated tent with a bar that sold suitably festive beverages. The mulled wine was certainly warming but perhaps not worth its $20 price tag!

There’s also a great Christmas craft market on the corner of Central Park, just as you come out of Columbus Circle subway station. The items for sale were a little bit more unique and included things like nice local artwork, cute Christmas tree decorations and handmade jewellery. A fifteen minute stroll into the park and you’ll also hit another ice rink that was less busy and more atmospheric than the one at Bryant Park. And then, of course, there’s the Rockefeller Centre.

Head to the Rockefeller Center to see the iconic Christmas tree 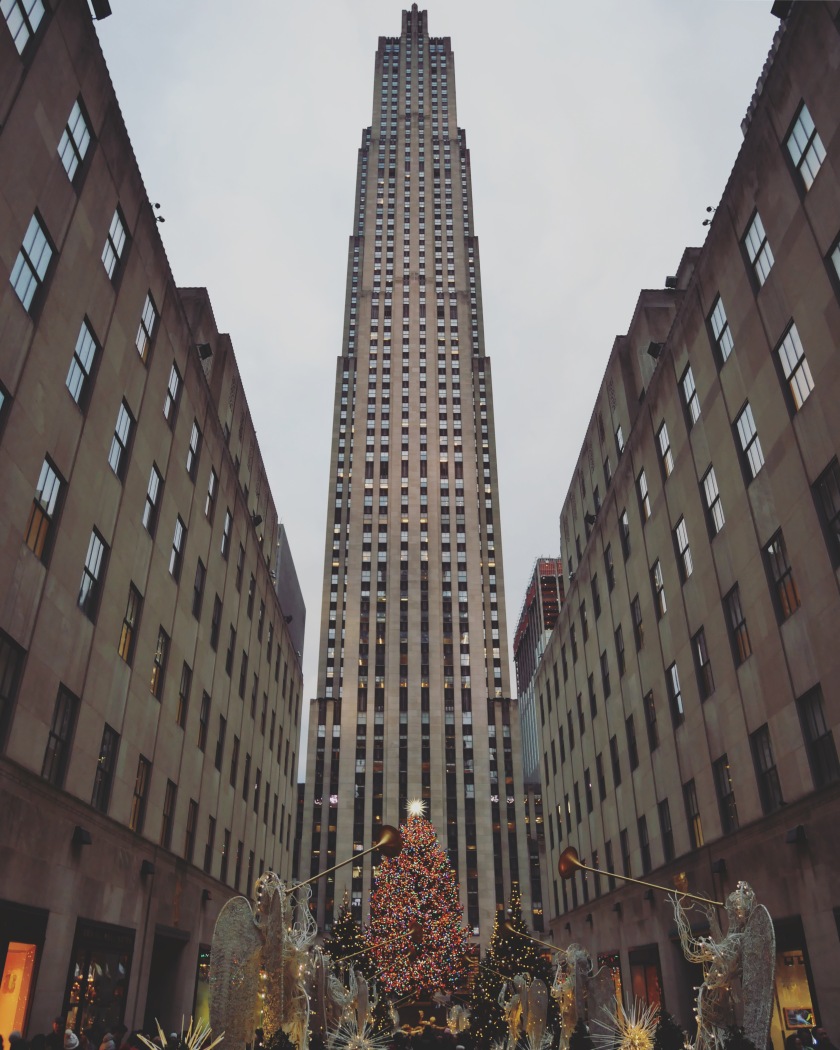 The tree set up just in front of the Rockefeller Center is somewhat of an institution in New York. If you’re walking up Fifth Avenue, you can tell when you’ve nearly arrived at it as the crowds start to thicken and people stand in rows trying to capture the perfect photo of the skyscraper and its twinkling tree.

There’s also a very pretty skating rink just below but I think you have to book in advance if you want to show off your skills on the ice. All in all, the experience of seeing the Rockefeller tree takes about ten minutes, however, you’re then perfectly positioned for some shopping at nearby Saks (with its impressive window displays) or to nip into the elegant St. Patrick’s Cathedral just across the road.

Like the sound of my wintery trip to New York enough to book one of your own for December 2019? If you do, remember to:

Feel free to comment below if you have any questions about NYC or simply if you enjoyed my post! I’ve not quite decided whether my next one will be about a summer or wintery destination yet but I’ll reveal all in due course.